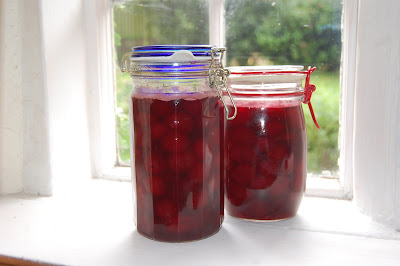 The gorgeous sunshine that we’ve had all week has disappeared this weekend to be replaced with heavy rain and warnings about flash flooding here in the north. So having put off any indoor projects while the sun has been shining, I decided that today was the perfect day to get stuck in with some kitchen projects.

There’s been a glut of plums on our trees, so I decided to preserve them in port now ready for a winter treat! This is a super easy way to preserve them (and much less time consuming than making jam) – and it smells like Christmas has come early while they’re cooking!

Ingredients:
1 pound (440g) Preserving sugar (normal white sugar will do as an alternative)
250ml Port
200ml water
2 pounds (approximately 1kg) of plums
Preserving jars (clean thoroughly before using)
Clean the plums.
Mix the port, water and sugar in a large saucepan. Bring to the boil for 2 to 3 minutes. (Stir occasionally to prevent the sugar from burning.)
Add the plums, return to the boil and let it boil for around 7 or 8 minutes, until the plums begin to soften.
Remove the mixture from the heat and using a large spoon, place the plums in the cleaned preserving jars. Pour in a little of the mixture they were cooked in until the liquid is around an inch and a half from the top of the jar. Pour approximately an inch of extra port in before sealing.
Once you’ve finished, store the plums in a dark place for at least two months.
Have a great Sunday!